Institute of Technology and Management in Construction

One of the major challenges during the process of decommissioning nuclear facilities is the cutting and disposal of the reactor pressure vessel with its related installations. This can only be achieved with remote-controlled tools and devices for cutting and conditioning due to the exposure to ionizing radiation for many years. For radiation protection reasons, under water cutting techniques are preferred to exploit the water’s shielding effect. Here, “cold” separation methods are applied because these cutting processes practically exude no aerosols. One of the cutting methods that qualifies for this application is the water abrasive suspension cutting. This method is highly flexible in various application areas and resists the mechanical and thermal tensions of the material to be cut. The cutting requires an abrasive material that combines with the chip particles from the reactor pressure vessel during the cutting process; the resulting mixture is also subject to proper disposal. Consequently, this amounts to considerable secondary waste volumes, approximately doubling the overall amount of radioactive waste. Since the cost for the disposal of radioactive waste is very high, this cutting method of the reactor pressure vessel has been discontinued despite its technical advantages. During the former research project NENAWAS "New disposal methods for the secondary waste of the water abrasive suspension cutting technique” KIT and AREVA GmbH have developed a separation method for the secondary waste resulting from the water abrasive suspension cutting. This involved the filtering of the chip particles from the abrasive-steel-mixture resulting from the cutting process, using a prototype separation unit. The separation unit separates the chip particles using a magnetic separation method on the mixture. The unit specifically developed for this purpose is shown in the following picture. The picture on the right shows the key component; the magnetic rod filter. However, the microscopic analysis of the separated abrasive material showed impurities caused by chip particles. In this project, further in-depth research will be undertaken to fine-tune the filtering process to such a degree that most of the secondary waste can be released.

The project’s aim it to provide basic research to optimize the quality of the separation results to such a degree, that the secondary waste can be released in a conventional manner. Consequently, this would make it the preferred cutting method for the upcoming decommissioning projects in Germany. To achieve this, the existing prototype unit is used for further tests (with other cut steel types and processed mixtures). Additionally, a numeric flow simulation of the magnetic filter will be done. It is also planned to perform and evaluate further separation tests in the controlled area of our project partner’s laboratory (Institute for Nuclear Waste Disposal) with a small lab-scale test unit with contaminated and radioactive material to determine its suitability for separating radioactive waste. 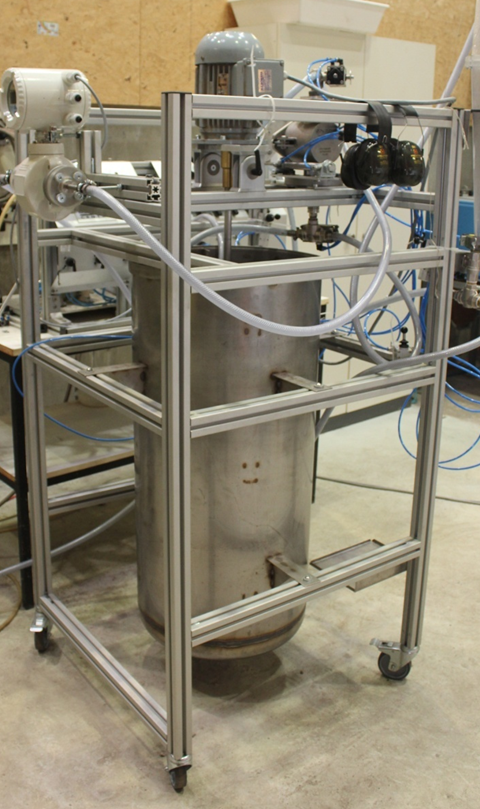