Institute of Technology and Management in Construction

During the decommissioning of nuclear facilities, the reactor pressure vessel and its internals have to be cut into small pieces to allow the final disposal in a nuclear repository. Due to the high radiation levels of these components, the applied cutting technique has to be performed remote controlled and submerged under water. One of the cutting techniques which suits these conditions is the water abrasive suspension cutting. It can be applied in very complicated and narrow geometries and has no direct contact to the cutting material, avoiding reset forces and making it insusceptible to material tension. The major drawback of this technology, however, is the generation of large amounts of secondary waste, due to the usage of the silicate abrasive. Since the resulting mixture contains radioactive steel chips from the cutting process, at the present moment this waste has to be properly disposed in a nuclear repository.

In order to reduce or even eliminate this secondary waste, a new treatment and disposal technique is being developed at KIT in close cooperation with AREVA GmbH. To achieve these goals two research approaches are being followed. On the one hand, research is being undertaken to treat the secondary waste by physical separation of the radioactive material from the mixture. In order to do so, a prototype test rig is being built and tested which applies a separation techniques based on density, particle size and magnetic properties. Emphasis for the prototype are placed on remote handling, a maintenance-free and efficient system, able to allow easy decontamination and to minimize waste and disposal of the separation plant. The second part of the project is to evaluate the subsequently disposal of the remaining radioactive waste as part of the concrete that is used to stabilize and shield the cut parts in the so-called KONRAD containers. The concrete mixture which allows the admixing of the remaining secondary waste is currently being developed at the KIT by the Institute of Concrete Structures and Building Materials (IMB) and Materials Testing and Research Institute (MPA).

The following figure illustrates the entire scheme and goals of the ongoing project: 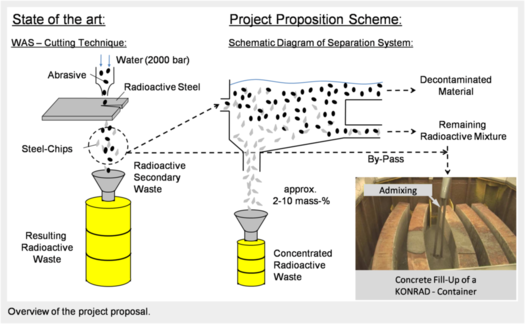 The combination of these two parallel research projects develops a method that makes it possible to treat and dispose the secondary waste generated by the water abrasive suspension cutting. The elimination of this major drawback will make the water abrasive suspension cutting technique a very suitable tool for future projects in the decommissioning of nuclear facilities.